Mary Kay Menees, my mother, said she thought Blanche went to the 1904 World’s Fair with the Robeys, but we have no written record of this.

Then several things happened which convinced me she DID go to the Fair:

A. My sister Marcia found for me the photo of the Rosenthal-Sloan booth at the 1904 World’s Fair in  St. Louis, Missouri.  This was the ONLY millinery booth at the Fair.

B. Blanche loved flowers all her life, as did her Pa, Austin Spencer, and we have a reference to this love in a letter from Austin to Blanche.  Once in the Rosenthal-Sloan Fair  Booth, Blanche would have been drawn to the unusual flower map of the United States which was mounted on the back wall of the booth.

C. Then we found the Flower Map AGAIN, at a later date, on a postcard, in the lobby of the Rosenthal-Sloan building, and I assume Blanche saw this when she went to register for the hat-making workshop, which occurred after the fair.

D. The Robey family was Jewish, and probably Mr. Moritz was also, and I assume they probably knew each other from the St. Louis Jewish community, and that the hat-making workshop offer to Blanche sprang from the friendship of these two men.  Very probable!

E. There is a postcard of the Rosenthal-Sloan building exterior is in Blanche’s box of history momentos. The post card of the lobby is in the collection of Dr. Susan Whitemountain. 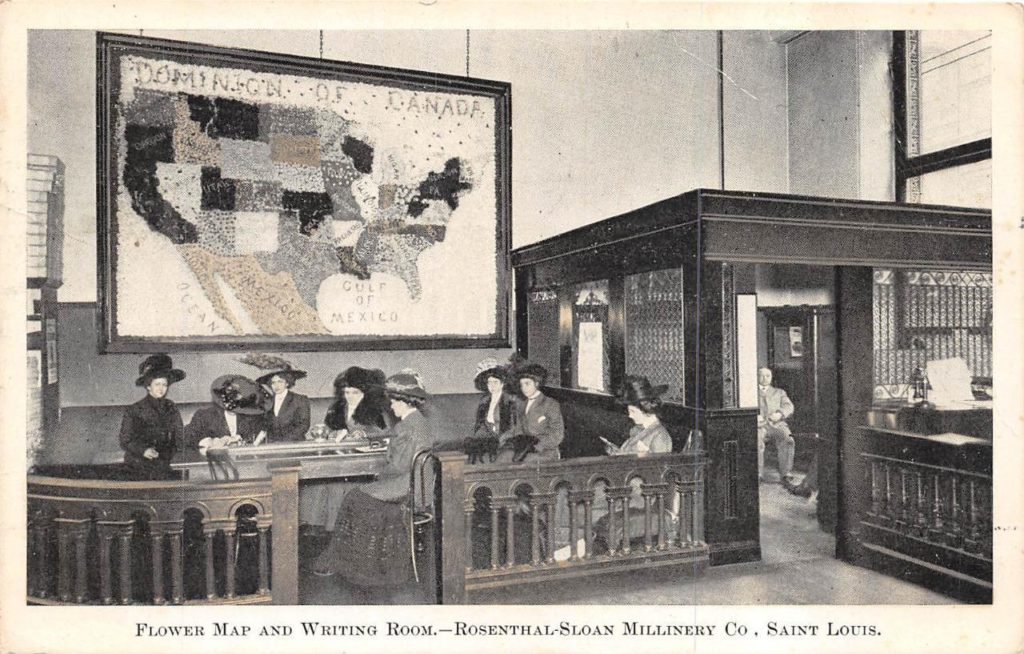