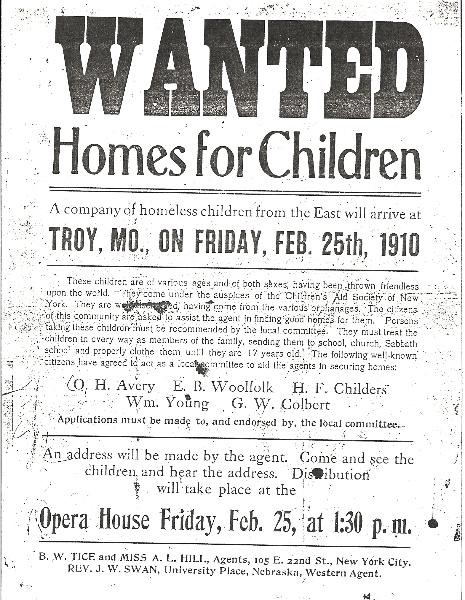 Between 250,000 and 350,000 orphan children were transported from New York City across the United States on trains and on Intercoastal and Great Lakes ships between 1859 and 1929. The children were first transported by Methodist Minister Charles Loring Brace. In 1869, three Sisters of Charity founded the New York Foundling Hospital and also started to transport children from New York across the country. Over the decades, the Children’s Aid Society sent children to Protestant homes and the New York Foundling Hospital sent children to Catholic homes.

All of these children and their accompanying adults traveled on regularly scheduled passenger trains and ships. No special “orphan trains” ever existed.

The Children’s Aid Society – The program (the orphan train movement) started by Mr. Charles Loring Brace was called the New York Children’s Aid Society, and became active in 1859.  Mr. Brace, for example, negotiated with the railroads to transport a child from New York to Missouri for $15.00 apiece. He was using 19thcentury train technology to develop his program.

The agents who escorted groups of children were called “Placing Out Agents.”  For a time, these agents also sought yearly reports on child placements and/or helped with relocations when necessary. The Children’s Aid Society provided a half sheet of paper for an adoptive family to sign. The family was to provide meals, clothing, schooling and a trade for adult life.

The New York Foundling Hospital – The Sisters of Charity copied Rev. Brace’s use of railroads.  The Sisters, however, rather than sending children into the unknowing west, took orders for children from far flung families through the local and regional Catholic Church administrative structure. The Sisters then filled the orders with children. In short, the Sisters almost always knew what family would actually receive which child before the child left New York City.

The Sisters also required each family to sign an indenture work agreement before receiving a child. As with the Children’s Aid Society little actual oversight occurred.

Over the decades, children were sent to all 48 lower States and Territories. For an interesting perspective on where the children went, peruse this web site prepared by Creighton University student Maddy Cromidas.