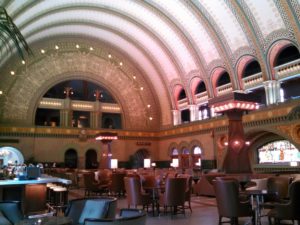 In March 2015, I visited Union Station Train Depot in St. Louis, Missouri.  Built in 1894, it was the largest rail station in the world, and was quite new when Blanche Spencer arrived at this station in 1902.

The single span Train Shed is the location where locomotives arrived on 42 tracks and where passengers disembarked.  The Head House contains waiting rooms, restaurants, and hotels.  The Grand Hall in the Head House is one of the largest public lobbies in the world, and contains a 65-foot vaulted ceiling with sweeping tiled arches, many stained glass windows, elaborate tile mosaics, angels everywhere, and gold leaf detailing.

I wanted Blanche to have an overwhelming first impression of St. Louis when she came into the Grand Hall.  I wandered in Union Station for two hours, taking  detailed photographs, getting brochures, poking in corners, and just imagining how a small group of rural children would feel climbing the Grand Staircase into this magnificent Grand Hall.  I even found the out-of-the-way white tiled bathroom on a lower floor dark hallway.

Between two palms in a corner off the Grand Hall, I wandered down a little-used side corridor to find a space labeled “Theater.”  In the theater space, the course of Blanche Spencer’s life changed forever…..